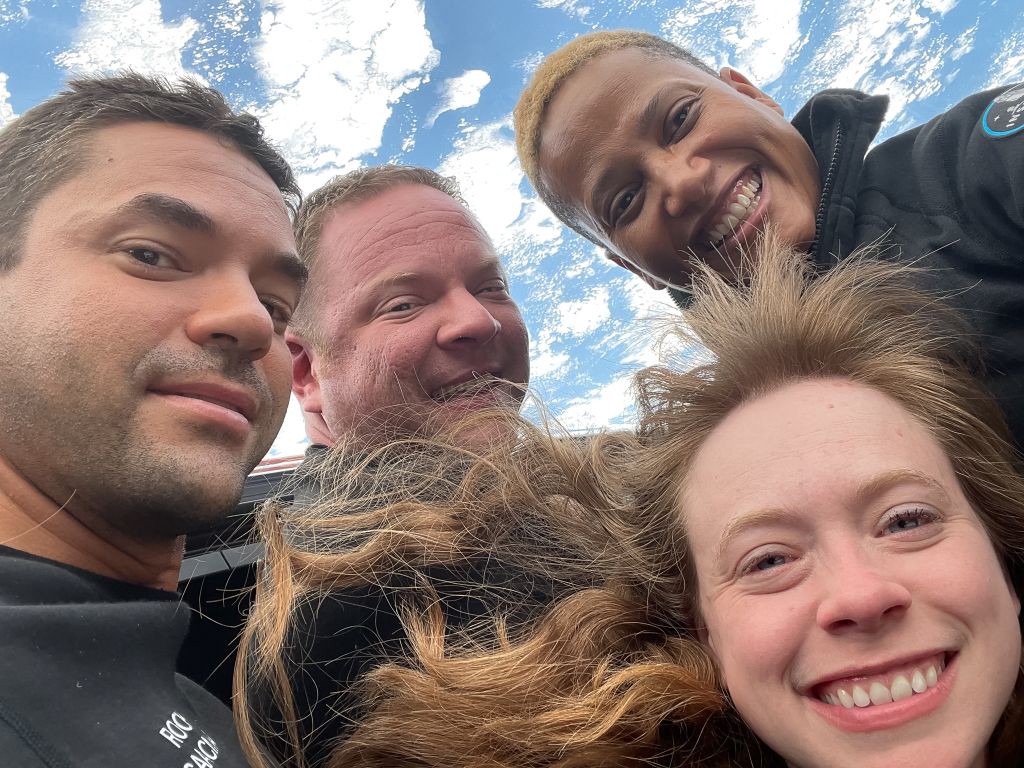 While this year may have sucked pretty hard on Earth, some pretty cool stuff happened in (and/or near) space in 2021. And while robots and rockets tend to steal the show, all of those bits of technology were designed, built, and operated by humans! Let’s look back at the past year.

See more: 10 Amazing Things Humans Did in Space in 2021 by Tanya Harrison

Nervous Mars scientists around the world watched with bated breath as the behemoth Curiosity rover began its descent toward the surface of the Red Planet, known as the “Seven Minutes of Terror.”

This was an audacious mission, and we all knew it.

Thankfully for all of us—and probably for the continued future of NASA’s Mars Exploration Program in general—the Skycrane system worked flawlessly, and Curiosity touched down at its permanent home in Gale Crater on August 5, 2012.

Gale Crater was chosen as the landing site for the rover based on satellite data suggesting the crater may have contained a lake around 3.5 billion years ago. While the water is long gone, its disappearance left behind a plethora of clays, sulfates, and other sedimentary rocks, all containing clues as to the martian environment when the lake was in existence. Curiosity’s mission goal was to look for signs of “habitability”—key things life as we know it would need to survive. Nine [Earth] years into its mission, it has revealed many important insights into the history of Mars. In celebration of its ninth landiversary, here are nine key discoveries from the rover so far:

See more: 9 Big Discoveries by Curiosity for its 9th Landiversary by Tanya Harrison

Graduate school is hard. Not going to sugar coat that. But it can also be a truly amazing and unique time in your life, and it doesn’t necessarily have to be miserable on top of being difficult. Here are some things you can do and think about before you even start applying to Ph.D. programs* that can help make the experience better—and hopefully something that makes you grow as a person and as a researcher:

*And if you’re on the fence about whether getting a Ph.D. is right for you in the first place, check out this other article.

See more: Surviving Grad School: 3 Tips Before You Even Apply by Tanya Harrison

The Space Race might have been America versus the Soviets, but how was the race viewed by the rest of the world?

On July 20, 1969, American astronauts Neil Armstrong and Buzz Aldrin became the first humans to set foot on a celestial body beyond Earth while Command Module Pilot Michael Collins kept dutiful watch from orbit overhead. Set against the backdrop of the Cold War and a “space race” between the United States and the Soviet Union, this amazing achievement could have easily been touted as a win for the U.S., laden with patriotic messages of America being the first to land people on the Moon.

See more: The International Impact of the Apollo 11 Moon Landing by Tanya Harrison

For years, I’ve been quite frank and open on social media (mainly Twitter) about a lot of aspects of my life and professional career as a scientist: How having a physical disability has impacted things, my experiences with harassment that nearly drove me out of the field, making the shift from academia to industry, and more. But my gender identity and sexuality are never things I really touched on directly because I didn’t think it affected my professional life—and the things I had made the decision to talk about on social media were pretty much all related to my career. When it came to my personal life in terms of things like my family or who I dated, I very intentionally kept that separate because none of those people had signed up to be in a public spotlight the way that I’d chosen for myself.

It’s not something I ever kept secret, mind you. I just felt like if it didn’t impact my professional life the way it might have for some other people who were more publicly and vocally out, then those were the people who could speak to those experiences better than I could. While being queer didn’t feel like it directly impacted my daily life in a professional sense, I did recognize that I wasn’t able to fully relate to some of the experiences of women in the field.

The tiny 4-pound (1.8 kg) helicopter that hitched a ride to Mars with NASA’s Perseverance rover just got a mission upgrade. Initially planned as a “technology demonstration” to prove whether or not powered flight was possible in the thin martian atmosphere, Ingenuity surpassed all expectations on the—at the time of writing—four flights it has successfully conducted thus far in its short tenure on Mars. Thanks to that success, Ingenuity will now be put through some additional paces, getting an upgrade from a technology demonstration to an operational demonstration.

As a scientist who works on robots that we send to other planets, I often hear complaints about how much money is spent on “space.” Space is viewed as this futuristic pipe dream, the realm of eccentric billionaires with money to burn. Many don’t see how money spent on “space” has any benefit to humanity, especially with pressing matters like war and poverty here on the ground.

And these are absolutely valid concerns, don’t get me wrong.

But space, like all of science, is thoroughly integrated with our society. Space is here and now. Space is completely entrenched in our everyday lives as Canadians to the point that we don’t even see it. At this very moment, thousands of satellites for everything from communications to navigation to imaging are flying over our heads. And in Canada, each one of us uses these satellites in some fashion an average of 20 to 30 times every single day.

Most people are probably familiar, even if not by name, with the iconic “Earthrise” and “Blue Marble” view of Earth taken by Apollo astronauts on their journeys to the Moon. Apollo 8’s Earthrise, taken on Christmas Eve in 1968, is often referred to as one of the catalysts that led to the environmental movement and the creation of Earth Day. Since then, many other space missions have captured photographs of Earth on their way to their final destinations across the Solar System. In honour of Earth Day, let’s take a look at ten of the most stunning views these spaceships have given us.

Scientists and engineers are nerds who like to have a bit of fun—even when it comes to their spacecraft. Let’s take a look at some of the Easter Eggs they’ve put aboard the rovers and landers on Mars:

Mars is a freezing polar desert. Nearly all of the water there is locked up in ice in the polar caps or surface frost, buried underground, or locked up in the mineral structures within rocks. But some of it exists high in the air as water-ice clouds. The image above shows the latest view of these clouds on Mars, hanging over the Curiosity rover in Gale Crater near dusk on the 3072nd martian day (“sol”) the rover has been on the surface of the Red Planet. These clouds are similar to wispy cirrus clouds on Earth.

This is far from the first time a Mars rover has captured breathtaking views of clouds.

Eric Berger’s new book gives me a whole new appreciation for what Elon Musk and all of the talented engineers at SpaceX have managed to achieve.

The commercial space landscape has come a long way in the past decade. Ten years ago, SpaceX barely had any successful launches under their belt. The Space Shuttle was about to retire, and I doubt anyone around at the time would have guessed that the next time humans launched into space from American soil would be aboard a SpaceX rocket, inside a SpaceX crew capsule, only nine years later. Booster landings only existed in the imaginations of engineers, but are now so routinely successful that it’s almost jarring when a SpaceX launch doesn’t have (or attempt) a booster landing.

Eric Berger’s new book Liftoff provides a fascinating and extremely detailed account of the earliest days of SpaceX straight from the mouths of the people that were there.