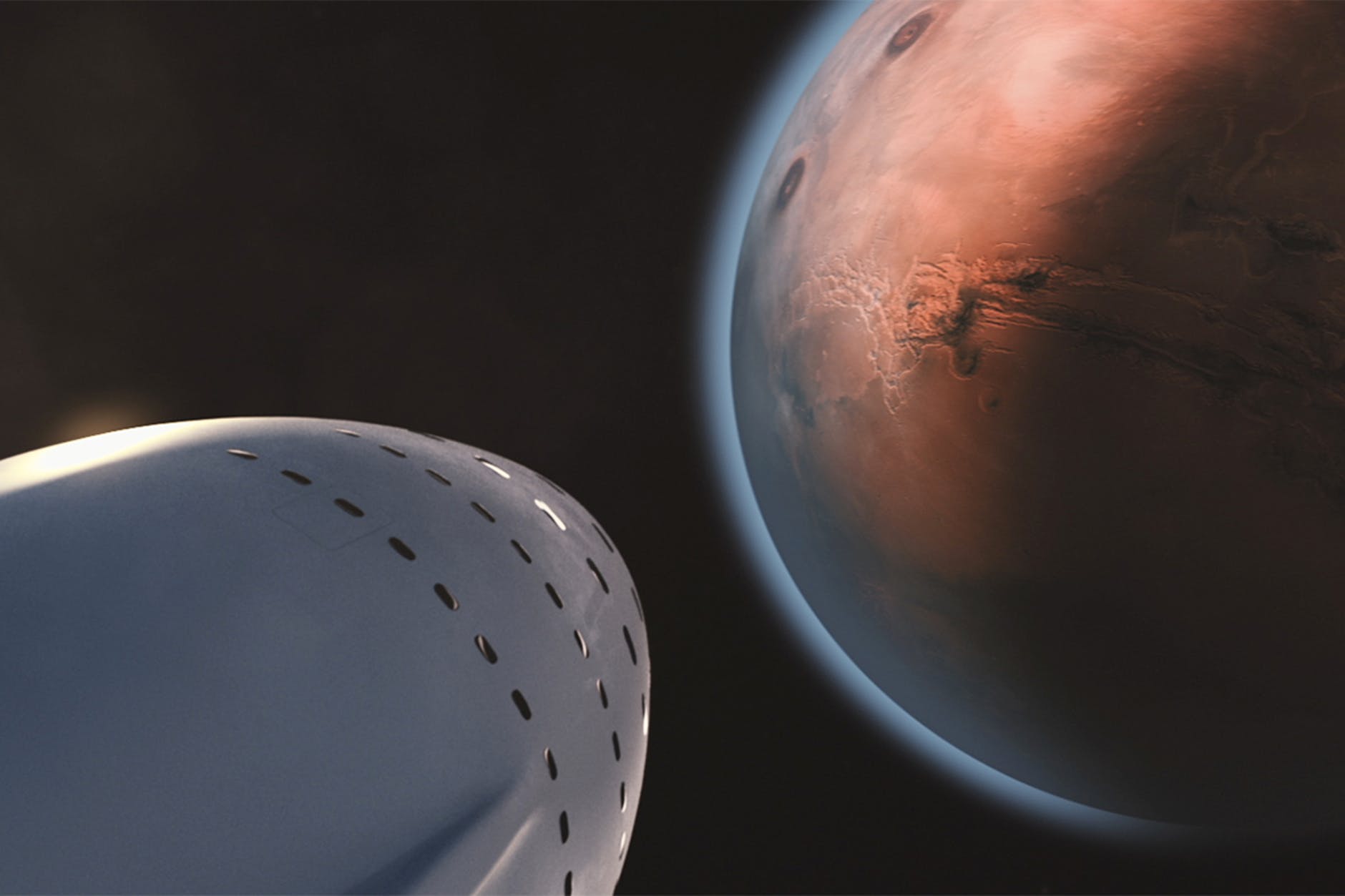 Photo by SpaceX on Pexels.com

The series centers on 12-year-old Cas, the first human born on Mars. “Doug wrote an edge-of-your-seat thriller of a novel, and we can’t wait to build out this story for TV audiences of all ages with Rob Cooper and the contribution of an impressive panel of experts,” said A.J. Trauth, VP of kids/family development at marblemedia.

Cooper (Dirk Gently’s Holistic Detective Agency, Stargate) will showrun. Dr. Tanya Harrison, who has a Ph.D. in geology with a specialization in planetary science and exploration, will serve as a consultant to ensure scientific credibility of the story world.

Los Angeles/Toronto/ Vancouver – (May 26, 2022) – marblemedia and Mezo Entertainment announced today they are in development on a live-action sci-fi adventure series, Generation Mars (10×60’). Helmed by creator Robert C. Cooper (Dirk Gently’s Holistic Detective Agency, Stargate) the series is based on the popular books of the same name by Douglas D. Meredith.

Generation Mars chronicles humanity’s perilous extraterrestrial endeavour from the unique point of view of an extraordinary family. It’s an optimistic heart-pounding thrill ride based on hard science that will inspire adventure-seekers of all ages.

Mars was once wet enough to cover its entire surface with an ocean of water hundreds to thousands of feet deep, holding about half as much water as the Atlantic Ocean. However, the most recent epoch of Martian history, known as the Amazonian — the past 3 billion years of the Red Planet— is often considered cold and dry.

Now, in a new study published Wednesday in the journal Science Advances, China’s first rover on Mars finds evidence of water there potentially within the past 700 million years.

“Liquid water may have been around underground much more recently in Mars’ history than previously thought,” planetary scientist Tanya Harrison, the director of Strategic Science Initiatives at Planet Labs, did not participate in this research, tells Inverse. “That’s exciting from an astrobiological standpoint because on Earth, anywhere there’s liquid water, there’s generally something that has managed to survive there. So, it gives the potential for a small habitable environment on Mars in the geologically recent past.”

It was a natural fit for the Finland-based SAR constellation operator founded in 2014. Eight years later, the Arctic remains a key market for Iceye due in part to its lack of terrestrial infrastructure.

“The only way to monitor it is through satellites,” Modrzewski said.

As Arctic sea ice dips to new lows, economic activity in the region is picking up. Meanwhile, soil under the Arctic tundra is thawing while some vegetation above is flourishing. To track the changes, companies and academic researchers often turn to satellite-based data products.

Spire Global, for example, is developing datasets to help people make decisions about what to do as the Arctic region evolves over time, said Kevin Petty, Spire vice president of weather and Earth intelligence.

With a fleet of more than 110 satellites, Spire tracks the movement of ships and airplanes through the region in addition to gathering atmospheric temperature, pressure and moisture data by noting how signals from GPS and other Global Navigation Satellite Systems change as they pass through the atmosphere.

By observing how the same signals reflect off Earth’s surface, Spire also can provide customers with data on soil moisture levels and sea ice.

Planet is shedding light on the Arctic with more than 200 satellites in polar orbit acquiring electro-optical imagery.

“This is a type of application that we’re starting to see pick up quite a bit because we have so much coverage both spatially and temporally across the Arctic,” said Tanya Harrison, Planet scientific strategy director.

For instance, Sarah Cooley, a University of Oregon assistant professor, applies machine learning to Planet imagery to track changes in hundreds of thousands of Arctic lakes in areas where the permafrost stores carbon.

“Her results are suggesting that the combined action of all of these small lakes is actually going to be quite a substantial greenhouse gas source moving forward,” Harrison said. “That research is only possible with a dataset like this, because she’s looking at subseasonal scale over a massive area of the Arctic.”

Tanya Harrison never thought she was going to be an astronaut. But she was determined to go to space. And she did just that – through satellites, first to Mars, and now looking back at our own third rock from the Sun as she uses satellites to map places near and far. We talked with her about what it’s like to be a Martian, making science more accessible to those with disabilities, and what it’s like to view some of the most beautiful places on Earth.

This episode was produced by Shane M Hanlon and mixed by Collin Warren. Artwork by Karen Romano Young. Interview conducted by Ashely Hamer.

There’s a ton of space-related news dominating the headlines right now. Billionaires are engaged in a space race, celebrities are riding along in rockets, and 1,500 pages of UFO-related reports were just declassified by the government. The age of space tourism may soon be upon us, but the age of space curiosity is already quite firmly here. Whether you end up on a tourism rocket, living in a space station a la Zenon: Girl of the 21st Century, or just reading about the cosmic goings-on from the relative comfort of Earth, you’ve probably already got a lot of questions. One might start with: How, exactly, do they go to the bathroom up there?

It could seem low-brow or immature to ponder this when the idea of space exploration is so complex and—with the climate catastrophe going the way it’s going—even vital, but we think it’s quite reasonable to wonder. Here’s your answer.

What is the primary barrier to traditional bathroom use in space?

At the heart of this issue is gravity, or rather, the lack of it out there in space. The concept of gravity is a simple one we all know and understand: There is a force that pulls things down to Earth. That’s physics. We all get it.

In space, where there is less gravity, you float. Everything floats. Whatever isn’t secured to a surface will be suspended, which is why we see videos of astronauts zipping themselves into little sleeping bag contraptions when it’s time to doze. Dr. Tanya Harrison, a planetary scientist, told Lifehacker that on the Space Station, astronauts exist in “microgravity.” They are still close enough to Earth to have a little gravity, but they’re essentially always in a state of “falling.” (Interestingly, she said, though their urine is basically “floating” inside their bladders, astronauts have reported that the sensation of needing to use the bathroom remains the same in these conditions.)

See more: How Do Astronauts Shit in Space? by Lindsey Ellefson

In 2021, members of the Space Law & Policy Human Rights Group spoke with Dr. Tanya Harrison about her role at Planet and the use of Earth-imaging to monitor climate change and human rights violations. Below is a subset of shortened responses from the conversation.

For anyone living in areas less directly affected by the climate crisis, maps that show change over time provide a crucial bridge to understanding what’s really happening in other places, and how quickly.

“By helping people visualize how the world is changing, maybe that will give them a better understanding of climate change as a whole,” says Tanya Harrison, director of science strategy at Planet, a private satellite imagery company. “How is your neighborhood being affected? How is your grandmother’s house being affected? Maybe she lives on the other side of the country or the other side of the world. In a way, that can kind of make this a little bit more personal.”

See more: How next-gen satellites are transforming our view of climate change by Megan Wollerton

While this year may have sucked pretty hard on Earth, some pretty cool stuff happened in (and/or near) space in 2021. And while robots and rockets tend to steal the show, all of those bits of technology were designed, built, and operated by humans! Let’s look back at the past year.

See more: 10 Amazing Things Humans Did in Space in 2021 by Tanya Harrison

The first all-civilian crew ever to orbit the Earth have blasted off on their historic mission.

The Dragon capsule containing the four citizen astronauts was launched atop a SpaceX Falcon 9 from the Kennedy Space Centre in Florida.

One of those aboard the mission, billionaire entrepreneur Jared Isaacman, paid an undisclosed fee to SpaceX for the chance to fly with three others.

During its three-day journey the capsule will orbit the earth once every 90 minutes at a speed of more than 17,000mph and an altitude of 360 miles – even higher than the orbiting International Space Station and Hubble Space Telescope.