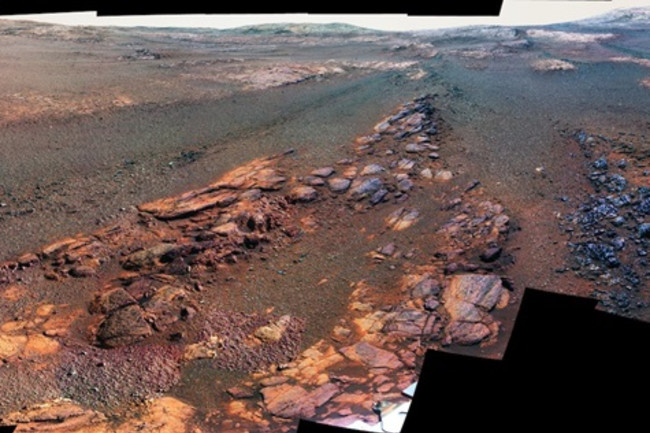 Last June, space exploration enthusiasts from across the world collectively held their breath as a global dust storm enveloped Mars. They did so not because our view of the Red Planet’s surface was obscured, but instead because a go-kart-sized rover named Opportunity, which had been roaming the Red Planet for nearly 15 years, fell silent as the storm intensified. After eight months of fruitless attempts to resurrect “Oppy,” which was only slated for a mission lasting 90 days, on February 13, NASA scientists finally declared: “Mission complete.”

However, although Opportunity is now forever resting in peace, just before the massive martian storm struck, the tenacious rover managed to capture one final panorama of the Red Planet — and it’s glorious.…

…Despite the fact that Opportunity is clearly not a living creature, its official demise last month sent ripples of sadness echoing through the astronomical community. However, according to Tanya Harrison, Director of Research for the “NewSpace” Initiative at ASU and Science Team Collaborator on the Mars Exploration Rover (MER) Opportunity, the rover’s tireless efforts to explore the Red Planet will not soon be forgotten.